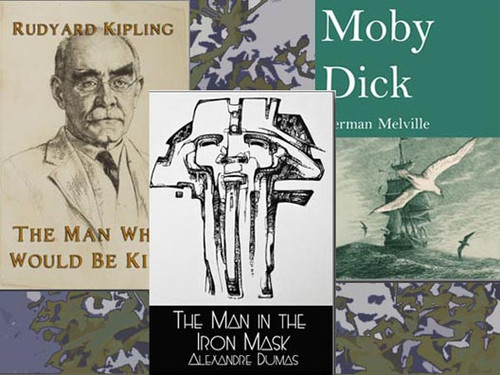 The Man Who Would Be King - by Rudyard Kipling

Two free-spirited English ex-soldiers seek adventure and fortune only to find Lady Luck lending them a most generous hand. In an amazing series of events (peppered with lies and deceit), the two become kings of Kafiristan. When one of the pair begins to actually believe the lies, all falls apart and their true identities exposed leading to disaster. Rudyard Kipling’s The Man Who Would Be King is a classic tale of greed, blind ambition, honor lost, imperialism and … Freemasonry. Symbolic hints and clues fill the book and when read with a discerning eye, it is a clear example of how good can turn to evil when we stray from the path. Photographic Reproduction of the 1899 Edition.Part of the Cornerstone Classic Reproduction Series.

The Man in the Iron Mask - by Alexandre Dumas

Who was the Bastille prisoner hidden away in an iron mask? Was it Louis XIV’s twin brother, an older brother or some other political rival? Speculation has abounded since the 1700’s. In his dramatic finale to the Three Musketeers chronicle, Alexandre Dumas gives us his version of this classic tale (filled with symbolism) and, of course, the Musketeers play key roles. Photographic Reproduction of the 1910 Edition.Part of the Cornerstone Classic Reproduction Series.

“Call me Ishmael.” With this line, one of the most powerful works in American literature opens. Filled with physiological and metaphysical implications, Herman Melville’s “Moby Dick” is not only one of the Great American Novels, it is a paradox between reality and the supernatural. Is the whale just a large animal being pursued by a madman, or is there much more to this story? “Moby Dick” is the subject of countless papers psychoanalyzing all aspects of what is said, done and suggested in the book. It is a classic deserving of being read and reread. Photographic Reproduction of the 1892 Edition.