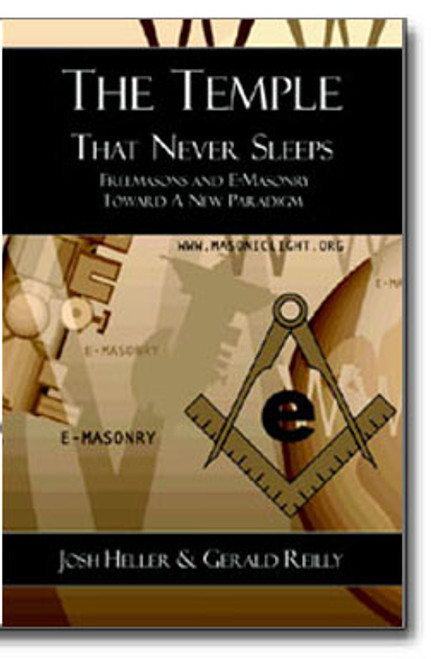 Freemasons and E-Masonry Toward a New Paradigm

by Josh Heller and Gerald Reilly

A revolutionary book for every Freemason.The two authors, American and UK Masons, present a radical view of Freemasonry for both today and tomorrow. In addition to their ideas are those of numerous Internet Masons (E-Masons) from around the world who, by sharing the experience of their own Masonic journey, have provided stunning personal insight into the viability of the Craft in the Internet Age.This book will challenge your understanding of Freemasonry today and how it might transform for future generations.

“Brothers Heller and Reilly have been involved from the beginning with www.masoniclight.org, one of the oldest and largest Masonic chat groups around. This book is the result of a survey conducted among participants in the site about the relationship of E-Masonry and Masonic lodges. It is an important book to read.

It is also, in some ways, maddening. Few things move me to cries of Heresy! (I’m called a heretic too often myself to enjoy painting with that particular brush.) But there are parts of the book which make me want to bring out the torches and pitchforks. That’s probably why it is important to read it. A large part of me is afraid that, while it may be heresy, it may also be truth. Certainly it is true that electronic Masonry and chat groups challenge many of the traditions. Such things as recognition, regularity, and clandestine status simply don’t enter into the picture as limitations on conversation. I also know, from talking to young Masons, that many of them regard such concerns, especially regularity and recognition, as simply silly.

There is no question that instant communication and the World Wide Web are changing the world rapidly and in unpredictable ways. It is also true that Lodges and Grand Lodges which do not make effective use of those tools are going to be left hopelessly behind. There is much good information in this book. It is worth reading. Whether it is a blueprint for the future, or a copy of the enemy’s battle plans, each will have to decide for himself.”

“The authors have taken upon themselves the task of considering the phenomenon of E-Masonry to see how popular it may be and to find out what its practitioners are saying that it is achieving for them. This includes an initial and exploratory enquiry to see if there is any evidence that E-Masonry provides anything of added value for Freemasons in general or remedies for any possible limitations that may be inherent in contemporary Masonic practice in particular.

The authors proposed a questionnaire based on 19 questions covering the basic aspects of traditional Freemasonry and E-Masonry in particular. I don’t want to reveal in advance here their answers but only to summarize the most innovative ones.

The respondents make overwhelmingly clear that they want cross-jurisdictional communication even if E-Masonry is officially made available via jurisdiction or lodge: an explicit challenge to the traditional jurisdictional prerogatives around recognition and visitation. It is a challenge to the concepts of “mainstream”, “regular” and “clandestine.” Further, when lodge attendance is not possible, E-Masonry is proving to be a means of support and a resource for the maintenance of interest in the Craft. Many comments are made indicating that, for a variety of reasons, E-Masonry is not only sustaining, but is proving to be a sustainable form of Masonic experience. It can be fitted between other commitments; it is available 24 hours per day, 7 days per week and 365 days per year. It saves the need to travel; it is cost effective and stimulating, calming and consoling. It is becoming for some, if not a way of life, a valued part of their daily routine and a significant part of their Masonic improvement.

Maybe this book presents a radical view of Freemasonry, but why we often forget to remember how much Freemasonry has been innovatory during the Enlightenment? This book is well written, ready to read and a starting point for further investigations and discussions. For sure Grand Secretaries will not like this book, but in the meantime and paradoxically, exactly this is the reason of its high value. Freemasonry is not and cannot be a mummified body.

Josh Heller is American, member of the Grand Lodge of Pennsylvania, the first in his Masonic district to make the necessary inquiries via the Internet. An avid Masonic enthusiast, he combined his love for IT with his newly discovered love of the Craft and founded the AllThingsMasonic, now the Masonic Light group, in 2000 where he continues to seek and share Masonic light with hundreds of Freemasons from around the world on a daily basis. Gerald Reilly is English, member of United Grand Lodge of England. Within the first year meet the late Brother Sam Allen, a scholar, who provided him with eight years of unrivalled mentoring and nurture. He writes for Freemasonry Today and provincial journals and provides lodge lectures. He joined the Rosslyn Temple e-group and was invited by Josh to become a founder member of Allthingsmasonic and Masonic Light.”

In the Pronaos of the Temple of Wisdom

The Stone of the Philosophers: An Alchemical Handbook

Wisdom of the Ages

TK and the Great Work in America

The Power and Passion of Freemasonry

With the Adepts: An Adventure Among the Rosicrucians

The Occult Life of Jesus of Nazareth