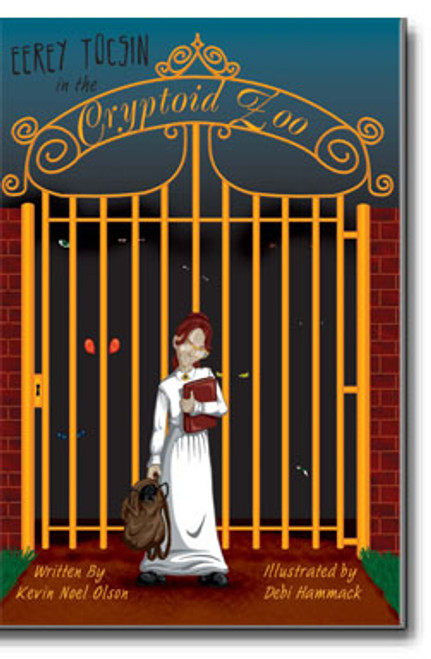 “One of the privileges of writing a review column is being able to break your own reviews. You see, this is a column devoted to modern day pulp fiction and this title is certainly not that. It is a wonderful, exciting, extremely original children’s book by the very talented Mr. Olson.

Having had the pleasure of reading the manuscript before it went to the presses, I was only to happy to contribute a small cover blurb for this terrific story. And now that the book is out and marvelously illustrated by Debi Hammack, I want all you Harry Potter fans to go out and buy this. Eerey Tocsin is one of the most charming, amusing and daring heroines to come down the literary highway in years.

This adventure is fast-paced, dark and mysterious and a through joy to read. Just when you think the wonder and magic have slowed down, you turn the page and wham, it jumps right back at you. I really, really hope this is on the first in a series. I am now an Eerey fan and I want more. Lots more.

– Ron Fortier, Writer of POPEYE and THE GREEN HORNET for Now Comics, and PETER PAN: RETURN TO NEVERLAND for Malibu Comics

“Opening this book is unlocking a door to worlds tantalizingly familiar and marvelously unknown. At times reminiscent of Doctor Dolittle, Alice In Wonderland and The Wizard of Oz while at other times all three and more rolled into one, ‘Eerey Tocsin in the Cryptoid Zoo’ is a dizzying, original tale. It is a journey of discovery about the world around us and the uniqueness within us. Kevin Noel Olson has an author’s voice that speaks to the young and adult reader and commands rapt attention from both groups. It is educational & exciting, and carries more than a hint of menace. The author weaves scientific facts, classic & modern myth, fantasy, puzzles, creative problem solving and interesting perspectives on the world we think we know into an adventure that doesn’t show the seams of its joined themes. He crafts a story that invites the reader to take part in an adventure that educates while it thrills, and does so with a very playful sense of humor. Eerey Tocsin, her cousin Edict that could pass for a werewolf or a troglodyte, an orangutaur named Loofah, Mongolian death-worms, an invisible boy that idolizes the legend under the bandages of The Invisible Man, Claude Rains, or the host of other beings inhabiting the mysterious Cryptic Zoo are all fleshed out in colorful style, even when you can’t see them. Books that are so visual with their storytelling transcend the printed medium and allow the reader to think they’ve gotten a DVD player implanted in their brain. Works destined for other forms like animation and feature films jump off their pages and hustle their fans into getting them made for all to see on the silver screen.” ‘Eerey Tocsin in the Cryptoid Zoo’ is one of those works.

“Eery Toscin is an odd little girl. Desiring to live life in the dark, though she claims to be afraid of it, she resides in your bedroom with her pet, an eight-pound spider named Eightball.

This book, however, takes her well beyond her comfortable confines and into the world of the Cryptoid Zoo, a zoo designed to house animals “which do not exist.” This world is full of animals with extraordinary features. Some talk, some do not. Some have big teeth, some can fly, while others are quite invisible. All have in common one trait; they exercise the reader’s imagination.

The one fly in this delicious dessert is a dobbleganger who has locked the real zookeeper away and is bent on destroying the zoo and its inhabitants, including Eery and her cousin. In the end, of course, our heroine, small as she is, overcomes the evil with a little help from animals concerned with saving their zoo.

While more modern in theme, this book reminded me of the days when I read Tom Swift books by flashlight under the covers. If you have a young one at your house, use them as an excuse to buy this book. Just don’t let them know you have it until after you’ve read it.”

“Eerey Tocsin is a wonderfully inventive and exciting story, good for all ages. Kevin Noel Olson has a strong sense of voice and care for his craft. The narrative flows well and leads the reader easily into Olson’s imaginative world. I highly recommend this book.”