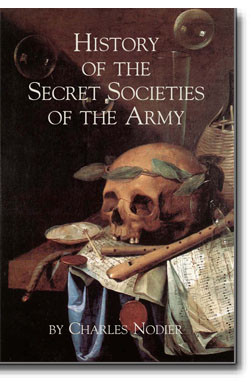 Before Da Vinci Code or Holy Blood, Holy Grail was the book by a reported Grand Master of the Priory of Sion …History of the Secret Societies of the Army.
Charles Nodier was the Librarian of the Bibliotheque de l’Arsenal in Paris when the archives of the Vatican was placed in his charge by Napoleon. Nodier and his assistants would have access to secret Vatican documents and records, long hidden from the world. His assistants would soon take on the pen names “Paul Christian” and “Eliphis Lévi” to write some of the leading esoteric books of the 19th century. But who was Charles Nodier? Was he a Grand Master of the secretive order known as the Priory of Sion? Was this amazing 1815 work purely innocent fiction as some claim? Or, was he trying to tell us something much more? Facsimile reproduction of the 1815 English translation.