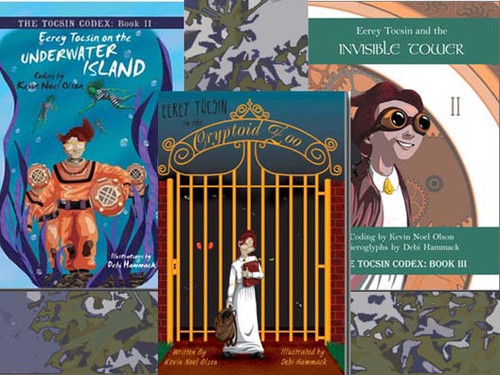 A wonderful and exciting story for children of all ages. “It has been a long, long time, since I’ve encountered such original characters as Eridona “Eerey” Toscin, her werewolf-like cousin, Edict and their amazing mutant friends. From Eerey’s pet prehistoric spider, Eightball, to the adventurous organtaur, Loofah, this book is simply crammed with wonder and imagination leagues removed from other such books.” Ron Fortier – Writer of “Popeye” and “The Green Hornet” for Now Comics, and “Peter Pan: Return to Neverland” for Malibu Comics.

After facing a volcano in the “Cryptoid Zoo” and threatened with drowning in the “Underwater Island,” Eerey Tocsin and her friends return to face the greatest destroyer of all; Time. When the invisible boy disappeared in the Island, Eerey travels with her hairy cousin Edict and Loofah the orangutaur to the country of Lydia to find him. The search takes them through the air and backward through time itself. She discovers Pen, who can look like any animal or person, is in action again. Will the egomaniacal doppelganger destroy the world? Yes. Yes, he will. He already has. Only Eerey and her friends can stop him. “She’s back, that girl with the mischievous gleam in her eyes and adventure in her soul, for another amazing, bizarre adventure that will delight all ages. Move over Dorothy Gale and Harry Potter, here comes Eerey Toscin and the imaginative world of fantasy tales will never be the same again!” Ron Fortier (Pulp Fiction Reviews)